While The Vampire Diaries was primarily about drama and romance, fan favorites like Damon, Elena, and Stefan were also present in some funny scenes. 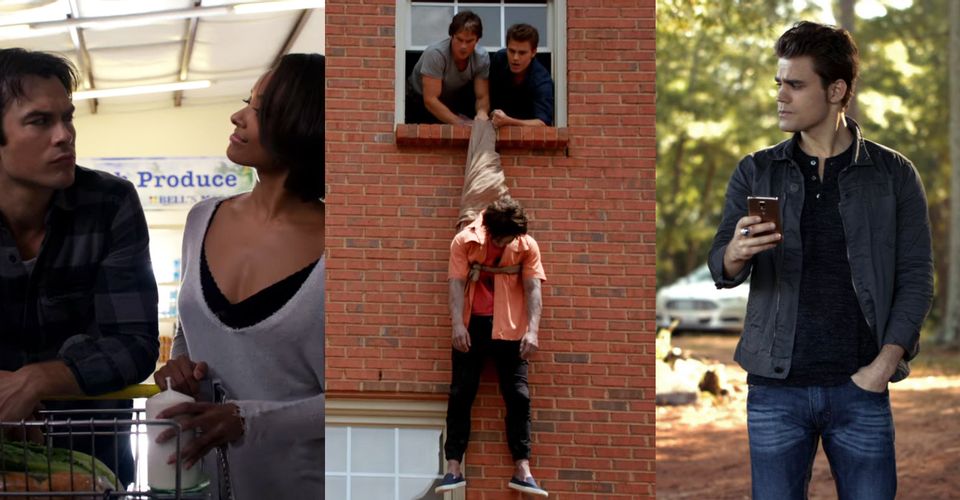 Supernatural dramas have a tendency to be dark and draining, which is what makes The Vampire Diaries stand out from earlier paranormal shows. The plotlines are serious, but the characters bring such a vibrant energy to every episode that nothing feels too devasting.

Damon is arguably the funniest character in the series, but everyone has acted as the comedic relief at one point or another. The Vampire Diaries toes the line between comedy and drama well, and there are fan-favorite scenes that stand out purely because of their absurdity. 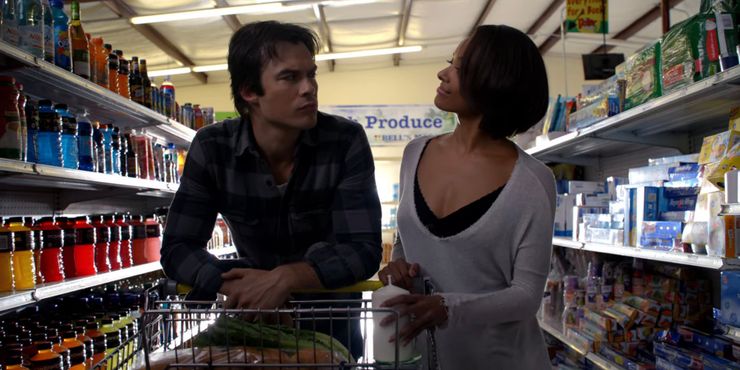 Damon and Bonnie’s scenes in the prison world were some of the funniest of the entire series. They’ve always had a love/hate relationship because while they don’t get along, they both seem to genuinely enjoy bickering with each other.

Even a task as simple as grocery shopping is entertaining because of Damon and Bonnie’s endless quips. They fight over who pushes the cart and Damon even stops mid-argument to signal for Bonnie to get the eggs. This only one of the many moments in The Vampire Diaries that could serve as proof that Bonnie and Damon were soulmates. 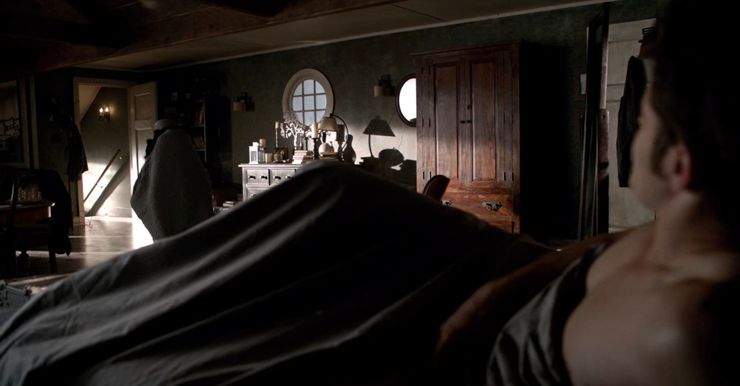 Katherine and Stefan had a turbulent relationship, but Katherine never stopped loving him from the moment they met in 1864. Stefan could never quite shake her as much as he wanted to, but never forgave her for everything she did to him and Damon.

When Katherine takes the cure and becomes human, she starts to undergo major character development. The morning after she and Stefan sleep together, Katherine notices she has grey hair. She flees the room with a blanket over her head and runs into the wall, while Stefan stays in bed looking amused, one of the many moments that spurred hilarious Katherine memes.

Stefan & Damon Hang A Dead Body Out The Window

Because it was Halloween, Damon and Stefan were able to get away with hanging a dead body outside. Unable to get him out through the front door, they lower him down, hoping the holiday will camouflage what they’re actually doing. 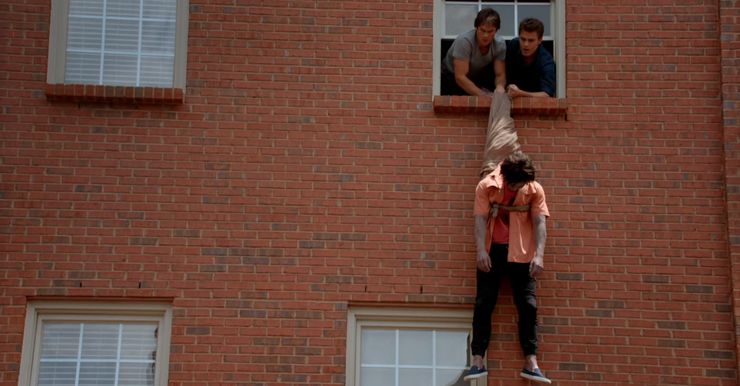 A student dressed up in costume stops to observe what they’re doing, but Damon and Stefan offer an innocent wave. The student buys into the fact that the body is a Halloween decoration and appears impressed by its realism.

Silas Complains To A Couple At The Bus Station 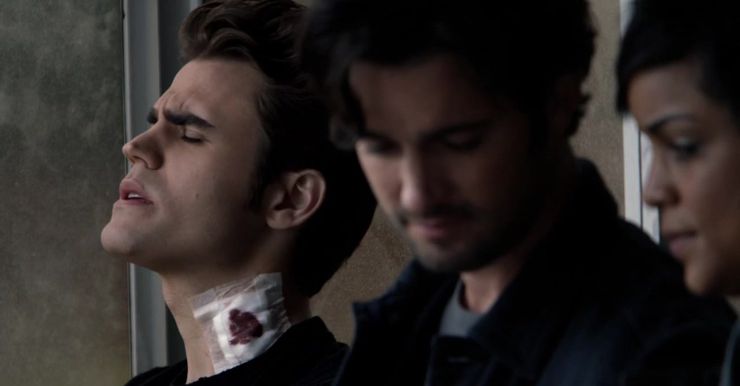 Silas is nothing like his doppelganger and takes whatever opportunity he can to crack a joke. But he was feeling down when he realized that the love of his life didn’t want to be alive anymore, and ended up seated next to a couple at a bus station.

Silas vents about his problems, and they both clearly think he’s out of it. Silas’s complaining makes the scene comedic, but he ruins the mood when he decides to kill the couple. However, he stays completely nonchalant while he does it.

Caroline Goes To Klaus For Help With Her Prom Dress 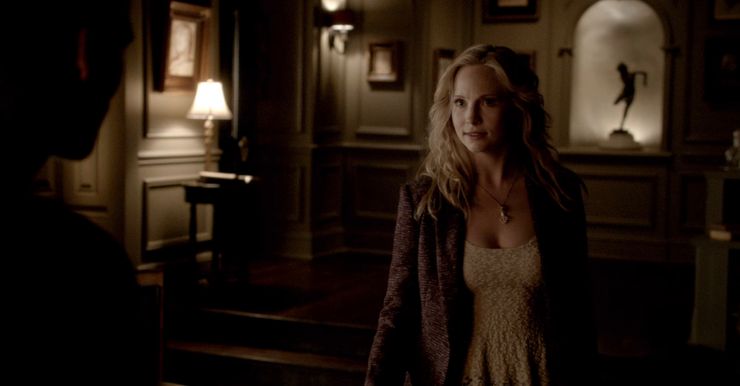 Storming into Klaus Mikaelson’s house, one of the most dangerous vampires on The Vampire Diaries, and demanding his help is a death sentence for anyone but Caroline. Not only does she barge in without permission, but what she needs isn’t really all that important.

Klaus had been in a bad mood and wasn’t up for company, but becomes immediately amused when he sees how frazzled Caroline is about Elena stealing her prom dress. Klaus laughs, and Caroline demands him to stop. Given how dangerous Klaus is, it was hilarious to see him try to contain his laughter over Caroline’s predicament. 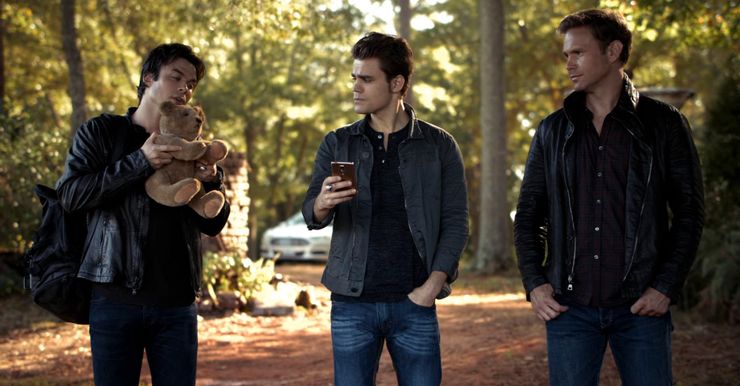 After discovering Bonnie’s still alive, Damon keeps her teddy bear with him. He and Alaric find Stefan’s current issue with Caroline particularly amusing, because everyone, except him, could tell that Caroline was in love with Stefan.

Damon starts talking through the teddy bear and says, “I saw that coming from a mile away and my brain’s made of cotton!” Alaric even chimes in and says, “See Stefan? Even the bear knew.” Stefan gets so angry that he kicks Bonnie’s bear across the field. 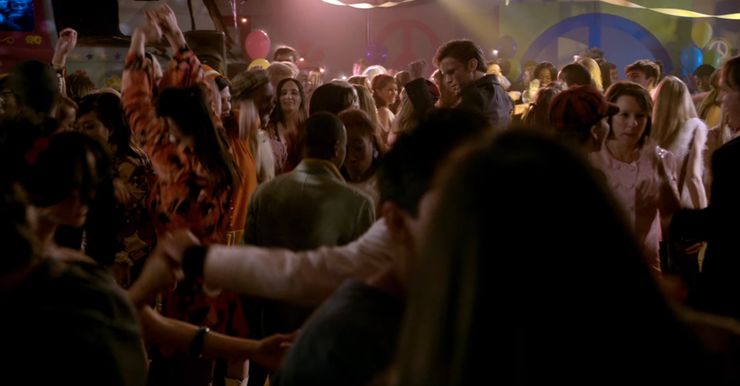 Klaus doesn’t need to be in his own body to have a good time, and he chaperones a school dance while possessing Alaric. No one seems to realize that Alaric’s comments aren’t making any sense, and Klaus gets away with deceiving Elena and her friends until the last minute.

When he’s making his way across the dance floor, Klaus can’t resist shaking it out. He dances his way around, and his moves aren’t bad. For some reason, he appears to be genuinely enjoying himself at the event. 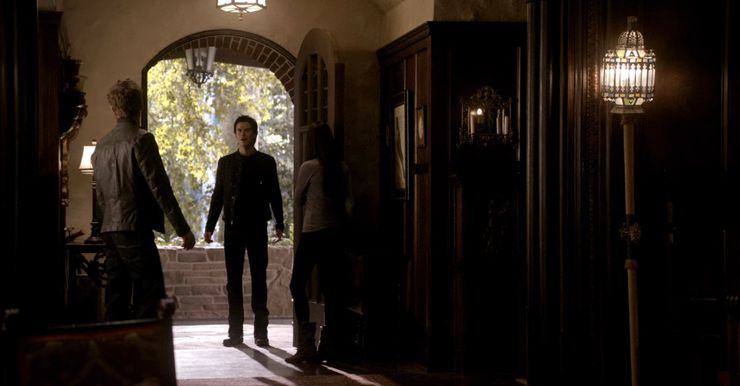 Elena, Damon, and Stefan were one of the most intense love triangles in The Vampire Diaries, but the three still managed to share funny moments. Damon has a tendency to do what he thinks is best and go off-book. To keep Elena safe from Klaus, Stefan and Damon sign the boarding house over to her. No vampire can get in without Elena’s permission, and that includes the Salvatore brothers.

Elena happily invites Stefan inside but leaves Damon glowering outside. When Damon asks Elena, “What are we? 12?” she replies, “One of us.” Damon agrees to Elena’s conditions but doesn’t miss the amused look Stefan shoots him after he walks inside.

Stefan Has Dinner With Klaus & Rebekah 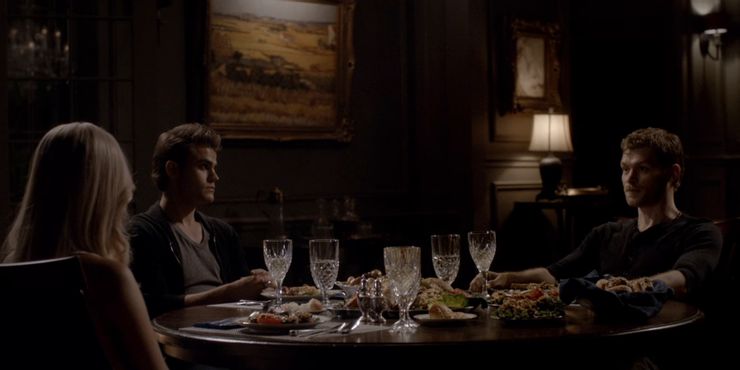 Both the Salvatores and the Mikaelsons had terrible fraternal relationships, but the latter was arguably worse. Klaus is known to dagger his siblings when they get into disagreements, so it’s not a bad idea to have a third party present. After Rebekah destroyed the last of Elena’s blood, Klaus disowned her as his sister.

Of course, that didn’t last for long, and Klaus attempts to make amends when he needs something from her. They bicker over dinner, while Klaus probes Rebekah to eat her veggies, and Stefan stares on in misery, wishing he could be anywhere else.

If you are a fan of vampires in particular and “The Vampire Diaries” in general, do not hesitate to visit our store and choose your favorite products.