What are the best Vampire movies? Vampires have been part of popular folklore since the 12th century. It is hard to track back the origin of Vampires in popular myths but there has been description of similar creatures in myths and tales all around the world. The term Vampire was made famous in the 15th century to describe creatures who looks like human being and feed on blood of other living organisms. Even though Vampires had been part of pop culture since the 12th century yet they were actually made famous in the 19th century. All credit goes to Bram Stoker’s novel Dracula that was published in 1897. The novel was a huge hit among audience and later on become on of the best selling novels of all time. Let’s quickly learn about related movies below:

This high Gothic horror was inspired by the real-life character of Hungarian Countess Elisabeth Bathory, who is widely regarded as history’s most prolific female serial murderer. Belgian filmmaker Harry Kümel based his Sapphic vampire, played by “Jeanne Dielman” actress Delphine Seyrig, on Marlene Dietrich, and clothed her in Nazi colors to underline her demagogue-like tendencies.

When the Countess arrives at a beach resort hotel with her “helper,” she becomes fascinated with a couple of naïve newlyweds (John Karlen and Danielle Ouimet), seducing them with daring tales of kink, seduction, and bloodshed. They had no idea she is speaking from personal experience. Marrying lesbian vampire pulp with European arthouse fare, “Daughters of Darkness” is a highbrow take on a bloodthirsty classic.

Hess Green, an anthropologist, gets wounded with an old ritual knife by his unstable assistant, George Meda, bestowing upon him the blessing of immortality and the curse of an insatiable hunger for blood. When George’s wife Ganja arrives in search of her missing husband, she and Hess embark on an unlikely, macabre affair.

Bill Gunn’s 1973 oddity, a unique essay on sex, religion, and African-American identity, subverts the vampire genre, utilizing vampirism as a surrogate for addiction. However, the plot’s intricacy makes it virtually hard to convert it to a simple metaphor or allegory. The film was shelved by its first distributor because they were dissatisfied with Gunn’s highly stylized version. It was then sold to another firm (Heritage), who significantly recut it (without Gunn’s participation) and released it under a variety of other titles.

For many years, a mangled version of the film was the only option. More than four decades later, Kino Lorber appeased the cinema gods by re-releasing “Ganja & Hess,” restored to Gunn’s original conception. It was chosen for Critics’ Week at the 1973 Cannes Film Festival and was recreated in 2014 by Spike Lee as “Da Sweet Blood of Jesus.”

Though they’re all well over 100 years old, their struggles feel all too relatably millennial, from making rent to navigating the dating game, all as they deal with pain-in-the-ass roommates. Even for vampires, the chore wheel isn’t easily enforced. “What We Do in the Shadows” is a refreshing reminder of how a shopworn genre, when turned upside down, can feel entirely new again.

In gorgeous color and delectable images, Francis Ford Coppola unleashes the sensuality that was always lurking underneath Bram Stoker’s original “Dracula.” The film has been attacked for its stiff performances and elaborate grandeur, yet few films in Hollywood’s modern period have employed color and clothing more expressively, as designer Eiko Ishioka’s art takes center stage in portraying the characters’ burning interior feelings. With the passage of 26 years, it’s difficult not to sense the picture’s heartbeat come pouring through Coppola’s perfection, as the film has matured like a good wine.

Do you ever worry that the worst thing you’ve ever said about yourself may come true one day? You may be as enlightened as anybody right now, but who knows if you’ll be sporting the MAGA hat in 40 years? That’s exactly what happens to Karloff’s army general. He considers himself to be a guy of science and logic. But what we truly want is to be in charge. And when his island comrades begin to perish one by one, he abandons his reason for superstition – the vorvolaka must be slain.

Just like Robert Eggers’ “The Witch,” in this film what you think is mythic nonsense may actually be real. Yet the darkest threat of all may not be evil beings that will do horrible things to you — it’s those that will awaken the horrible impulses inside you that you think don’t exist. It’s only fitting then that “Isle of the Dead” is lit in shadows worthy of the most crepuscular film noir — a testament to the extraordinary skill of director Mark Robson, who, along with Lewton, took inspiration from Arnold Böcklin’s late 19th Century paintings of the same name. High art has rarely met B-movies more successfully.

Following short film and television work, Guillermo del Toro’s debut movie as a director is a visually ambitious tale of immortality’s illusory, yet irresistible draw — and it heralded one of our most daringly unconventional cinematic talents. In terms of the special makeup effects that would come to characterize del Toro’s work, “Cronos” was well ahead of its time, performing horrific feats in-camera that would today be left to post-production. When an antiquities dealer (Federico Luppi) discovers an ancient scarab-like gadget, you know you’re in for a treat, as he quickly becomes possessed by its eternal powers — and ends up being pursued by Ron Perlman as a cunning mystery man dubbed Angel, who has his own dark purpose. Guillermo Navarro (Oscar winner for “Pan’s Labyrinth”) and composer Javier lvarez add strange depths to this unusual vampire story, which is presently streaming on The Criterion Channel.

If the fashionable bloodsuckers of the “Twilight” movies traded their frantic stares for expressions of ennui, they might have something in common with Adam (Tom Hiddleston) and Eve (Tilda Swinton), the retro cool vampires at the heart of Jim Jarmusch’s “Only Lovers Left Alive.” Removed from the supernatural context, Jarmusch’s protagonists in this agreeably light, witty sketch of a movie fall in line with the bored, retro cool outsiders found throughout his oeuvre.

It’s refreshing to see that, in Jarmusch’s world, even the undead have a lust for life and the capacity to complain about it with soul. If you can groove with Jarmusch’s patient, philosophical indulgences and his characters’ wooden expressions, the movie rewards with a savvy emotional payoff about moving forward even when the motivation to do so has gone. “It’s over for us, isn’t it?” Swinton’s vampire sighs when thinking about the past. But “Only Lovers Left Alive” is the latest suggestion that one of America’s great modern auteurs has plenty left to say.

In discussing the idea for 1994’s unexpected Sundance success “Go Fish,” directors Rose Troche and Guinever Turner reportedly stated that they were sick and tired of hearing “The Hunger” play on loop at every lesbian bar. That should give you some idea of how significant this seductive sexual thriller was to the lesbian community back in 1983, when it was starving for any meaningful representation, an impact that helped catapult it into the unrivaled cult classic status “The Hunger” enjoys today. The lesbian vampire tradition may be traced back to 1936’s “Dracula’s Daughter.” (The Sapphic bloodsucker first occurs in literature in the late 19th century.)

Upping the ante significantly on the now-classic trope, “The Hunger” starred Catherine Deneuve as a seductive temptress dealing with the death of her longtime lover (David Bowie), who becomes ensnared with a young doctor played by Susan Sarandon. With its cool ’80s color palette and slow but steady burn toward its bloody conclusion, “The Hunger” is a delicious snack to satisfy your Sapphic vampire craving.

The snowy setting underscores the prevalent isolation that defines the young protagonist’s life and the mystery that emerges from the discovery of his new companion, who becomes an unexpected resource against neighborhood bullies. Merging a Spielbergian sense of childhood awe with the dread of a darker world just outside the frame, Alfredson’s approach to gradual approach hints at menacing forces while leaving just enough up to the imagination of the viewer to fill in the gaps. Alfredson displays an extraordinary ability to use suggestive details about the nature of the vampire — in addition to the contrast between her morbid powers and the face of an innocent child—to maintain a horrific foundation thick with possibilities. 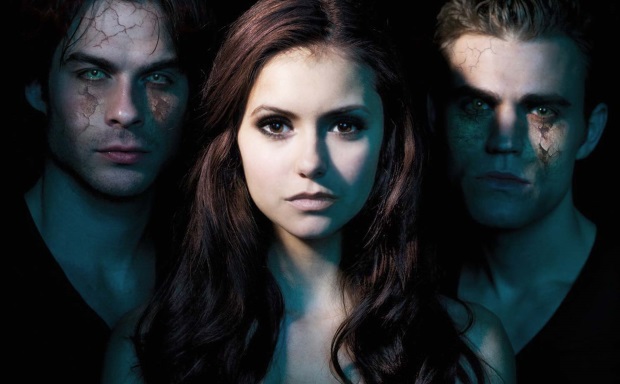 The series is set in the imaginary town of Mystic Falls, Virginia, which has a haunted past. It follows Elena Gilbert (Nina Dobrev), a young girl who has recently lost her parents in a car accident, as she falls in love with Stefan Salvatore, a 162-year-old vampire (Paul Wesley). As Stefan’s enigmatic elder brother Damon Salvatore (Ian Somerhalder) arrives with a plot to bring back their previous love Katherine Pierce (also played by Dobrev), a vampire who looks precisely like Elena, their connection becomes increasingly complex. Although Damon initially resents his brother for forcing him to become a vampire, he subsequently reconciles with Stefan and falls in love with Elena, resulting in a love triangle between the three. As they battle numerous adversaries and threats to their community, including Katherine, both brothers strive to defend Elena. As the series progresses, flashbacks explain the brothers’ background and the mythology of the village.

The pilot episode attracted the largest audience for The CW of any series premiere since the network began in 2006; the first season averaged 3.60 million viewers. It was the most-watched series on the network before being supplanted by Arrow. The show has received numerous award nominations, winning four People’s Choice Award and many Teen Choice Awards.

If you are a fan of vampires in particular and “The Vampire Diaries” in general, do not hesitate to visit our store and choose your favorite products.